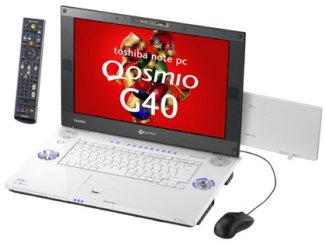 A new G40/97D configuration sports a 17-inch WUXGA (1920 x 1200) display; 2GHz, T7300 Core 2 Duo proc; 256MB of NVIDIA GeForce 8600M GT graphics, 2GB (up to 4GB supported) memory, 320GB of disk (2x 160GB); Gigabit Ethernet; HDMI out; a 2 megapixel webcam; and an HD DVD-R drive. It also brings plenty of expansion with 5x USB, Firewire, multiple memory card support, and a PCMCIA and ExpressCard/54 slot. Pretty much what we've seen before. Now, however, we're looking at a pair of digital tuners so that you can record and watch that sweet, sweet TeeVee at the same time. It's also pre-loaded with CyberLink SoftDMA allowing it to pull your HD recordings off your VARDIA series of recorders wrapped in a DRM-ladden, DTCP-IP hard candy shell. Want more Tosh integration? Great, 'cause it also supports HDMI-CEC allowing the G40 to control your new HDMI connected REGZA series of TVs.