MSI NX8600GT - switch to tweaked BIOS with press of a button 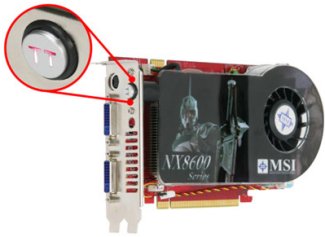 MSI introduced the NX8600GT Twin Turbo graphics card today which features a second BIOS which enhances the shader clocks to boost performance. Users can switch to this BIOS by pressing a button on the back of the PCI bracket:

For the hard-core gamer, MSI also launches a special version, the NX8600GT Twin Turbo, has two separate vBIOS on-board which carry two dedicated GPU/Shader/Memory clock settings. Users only have to press a hardware button on the bracket, and then the new (higher) clock setting can be applied without re-flashing the vBIOS chip. Also, these two vBIOS chips give extreme enthusiast a Die-Hard workability (another vBIOS chip as spare) if they want to tweak the vBIOS to find out the ultimate performance parameters between Shader clock and GPU core clock.

The firm also released another GeForce 8600 GT card with a tweaked BIOS - but that card doesn't feature a button to switch back to the regular BIOS.