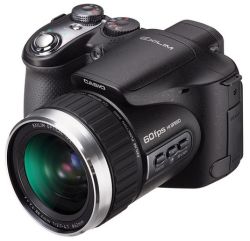 Casio presented a prototype of an upcoming Exilim digital camera for consumers which can shoot 60 images per second at a resolution of 6 megapixels. Besides this impressive burst rate the camera also offers an amazing 300fps when you're recording VGA movies..

The exact specifications aren't known yet but according to Casio the camera may even include a pre-shot function. This feature will let the device shoot photos and place them in the buffer memory before you even press the button, the advantage of this is that the camera will have captured shots even if you were too late to press the capture button!

This new Casio Exilim camera should be available next year.