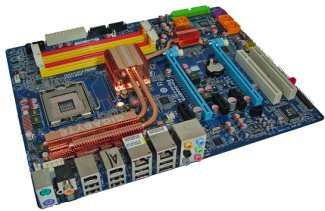 AnandTech got their hands on an engineering sample of the Gigabyte GA-X38-DQ6 - a motherboard based on Intel's upcoming X38 chipset.

This chipset is the Intel X38 that will replace the venerable 975X as Intel's performance oriented offering in the enthusiast market. The P35 has been an excellent chipset, serving user needs across a broad range of products starting with boards like the budget-priced/performance-oriented abit IP35-E up through the midrange Gigabyte GA-P35-DS3R and beyond that to the über-expensive and tweakable DFI LANParty UT P35-T2R in the DDR2 sector. The P35 has also been shown to be an admirable performer when matched with high speed/low latency DDR3 in boards such as the Gigabyte GA-P35T-DQ6 and ASUS P5K3-Deluxe.

Intel designed the P35 with the mainstream market in mind and always planned on the X38 being the chipset that would offer the next step in performance, whether that was in a multi-GPU situation with dual x16 capability and enhanced throughput, improved memory/chipset performance, or as a great overclocking platform for a wide range of Core 2 processors including the upcoming Penryn series.

You can check out the full review over here. The reviewer says he wasn't abel to find any faults in this motherboard, claiming that this engineering sample was more stable and better performing than several retail motherboards they're currently testing.

It's still a bit too early to tell but AnandTech believes Intel has another great enthusiast chipset on its hands.