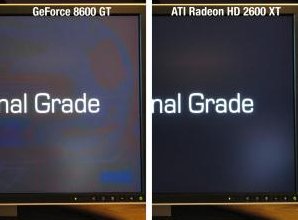 The company denies the alleged cheating optimizations, citing the ForceWare 163.11 drivers are old and had a aggressive default driver setting that causes the ghosting, according to Rick Allen, Notebook and Multimedia PR manager, NVIDIA.

The latest ForceWare 163.44 beta drivers have a less aggressive default setting. Users can also adjust the amount of noise reduction applied during post processing with the 0-100-percent noise reduction slider, he added.

“As we openly told reviewers, using aggressive noise reduction settings may cause ghosting depending on the content played so we recommend using moderate settings. We also recommend the improved 163.44 drivers release a few weeks ago which reduce this effect,” Allen said.

NVIDIA also fights back at the allegations, highlighting that the ForceWare driver allows users to adjust the noise reduction levels on their own, and even completely disable the feature. AMD’s noise reduction implementation is adaptive and applies varying levels of noise reduction, depending on the situation and what the driver deems necessary.

However, users cannot turn off AMD's noise reduction feature, which may be an issue in intentionally grainy movies such as 300, according to Allen.