Posted on Tuesday, Sep 11 2007 @ 02:47 CEST by Thomas De Maesschalck
Biostar showed off its TX38-A7 Deluxe motherboard to TweakTown. The firm claims this will be one of the most affordable X38 motherboards - without compromising on performance or overclocking potential.

TweakTown says Biostar got hold of some ex-Abit engineers and writes the motherboard has some pretty unique features. One of the most special things is that the motherboard uses a (detachable?) cooling solution which is placed outside your case:

s you can see from the picture above, this board has some rather unusual features. First of all it features heatpipes and although it’s not the first board from Biostar to do this, it’s the first board to feature an external extension. This is similar to DFI’s design, but the external fins are much smaller which should make it easier to install, but it won’t dissipate as much heat. 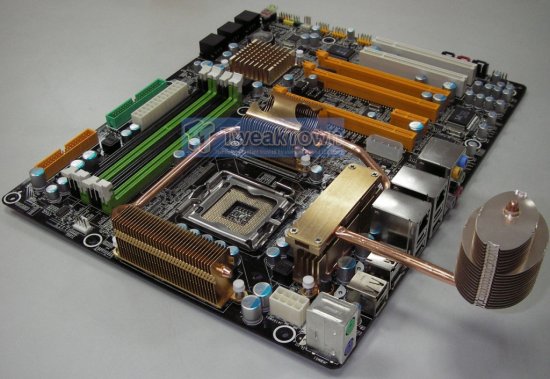