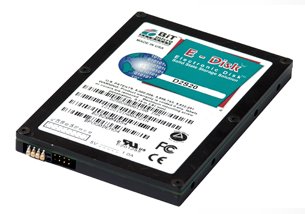 BitMICRO announced a new series of solid state disk with capacities of up to 416GB.

Thanks to the latest bit of news to come through the DailyTech inbox, we can report that BiTMICRO is surpassing all rivals with a 416GB 2.5" ATA-133 SSD. The E-Disk Altima family of SSDs (4GB to 416GB) uses single-level cell (SLC) NAND flash memory and offer 133MB/sec burst speeds. BiTMICRO also claims that the drive has sustained read/write speeds of 100MB/sec and can crank out 20,000 Random IOPS.

It's not available yet, according to BitMICRO the first production models will ship in March 2008. Pricing isn't known but will likely be several thousands of dollars as 64GB SSDs currently cost about $1,000.