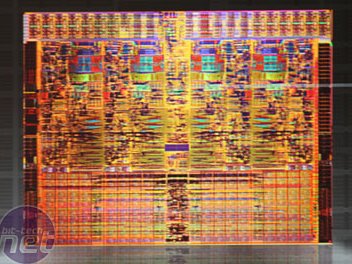 Bit Tech took a photo of a slide of the Intel Nehalem processor die.

From Intel's perspective, Otellini said that Nehalem is a very modular design, and from the developers' standpoint, it's also very dynamic too. He said that developers will be able to turn cores, caches and threads on and off.

Nehalem will launch with an eight core product in 2008, however each core will have two threads, making a total of 16 threads on a single CPU package. The design was completed just a few weeks ago and will feature 731 million transistors.

Glenn Hinton, Chief Nehalem architect and Intel Fellow, said that Nehalem is a higher performing design than the Core architecture.