Posted on Saturday, Sep 22 2007 @ 00:20 CEST by Thomas De Maesschalck
Game developer NetDevil announced that its multiplayer game Warmonger will be released for free on October 16, 2007.

The game will feature six levels and just like CellFactor: Revolution, which was released earlier this year, Warmonger will be used to promote the AGEIA PhysX hardware. Warmonger features a unique, piece-by-piece destruction system and is designed to deliver stunning fluid and cloth-based effects unlike anything seen before.

Utilizing the AGEIA PhysX processor, Warmonger allows for dynamic game play to emerge from the results of combat. Destruction is enabled procedurally, rather than with standard pre-canned animations that are found in most games today. In Warmonger, destruction can also be used as a tactical tool or a weapon. Safe cover is no longer a forgone conclusion. For example, a sniper can blow up the stairs behind him to block access, but a rocket blast to the floor beneath him can also hasten his own untimely end. Explosives, rockets, indirect fire, and vehicle combat can literally blow away walls, obliterate ceilings and open up new pathways to totally change the flow of the game.

Key features:- Players have a choice of five different weapons, including a grenade firing assault rifle, an RPG launcher, a shielded and mountable mini-gun and more.- There are six different maps including Sink or Swim, an underground staging area, The Approach, an old western "showdown", Knee Deep, an abandoned shopping center, Black Adit, an abandoned subway station, Car Collector, a wrecked parking garage, and Needle's Eye, an old industrial sector. 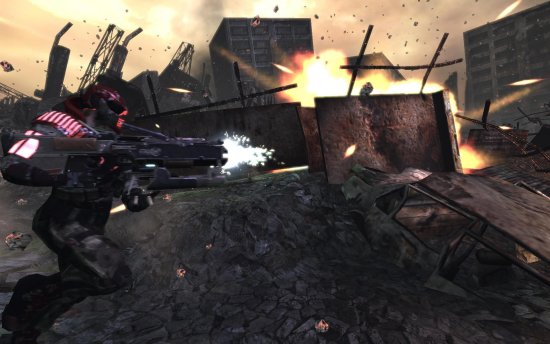