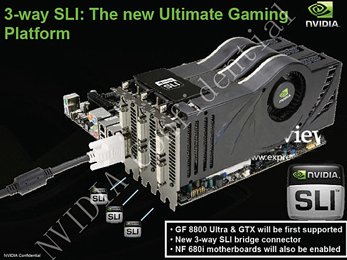 Nvidia Corp. not only plans to refresh its lineup of performance graphics accelerators this year, but also intends to introduce its 3-way SLI multi-GPU technology aiming extreme performance enthusiasts. But will the new triple SLI technology truly become a high-performance solution, or will share the destiny of Nvidia quad SLI?

According to a slide published by Expreview web-site, which is presumably from Nvidia Corp.’s roadmap, 3-way SLI is Nvidia’s new “ultimate gaming platform”, which will offer ultimate performance in three-dimensional games. ATI, graphics product group of Advanced Micro Devices, also plans to offer 3-way CrossFire multi-GPU technology, however, one of the graphics processing units (CPUs) in such configuration will be able to compute physics effects in case the game supports this capability.

On the other hand I don't really know if people will be enthusiastic about this new technology. Last year NVIDIA unveiled the Quad SLI technology and many people are disappointed by the poor driver software and the fact that it doesn't even work at all in Windows Vista.