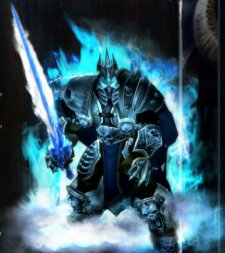 An interview about the Death Knight, a new unit in WoW: Wrath of the Lich King, was published at the World of Warcraft site.

Since the expansion is set in Northrend and you’ll be fighting the Lich King, it makes sense to add a class that is directly connected to the coming conflict. The death knights you will be able to play are no longer allied with the Lich King; instead, they have joined forces with the Horde or the Alliance to fight against Arthas. So by playing a death knight, you’re engaged in the story of Wrath of the Lich King right from the start, which makes the death knight a logical class choice for the expansion from a lore point of view. And since we’re designing this class to be able to fill a tanking role in groups, death knights will also be a viable and interesting choice for them, since the tank is one of those absolutely vital group roles.

One of our main goals for the death knights is to make them mesh well with the game both in terms of the expansion’s lore context and also in terms of being a valuable addition to the current class lineup, and so far we’re really happy with how the class is coming along.

Read on over here.