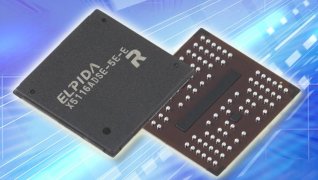 Elpida's 512Mb 4.8GHz XDR DRAM devices will be available for sampling in December 2007.