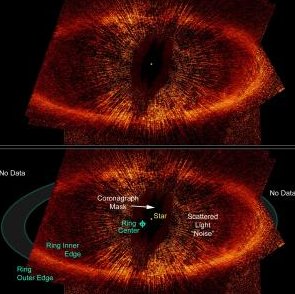 Scientists at the University of Rochesters claim they've found three nearby stars which may hold so-called embryonic planets:

As scientists try to piece together how our own planet came to be, they look to the forming planets of other star systems for clues. But astronomers have been unable to find evidence for one of the key stages of planet development, a period early in the planet's formation when it is only as large as tiny Pluto.

In an attempt to reveal this hidden phase of a planet's life, Alice Quillen, associate professor of astronomy at the University of Rochester, employed new Hubble Space Telescope imagery to measure the thickness of the dust disks that surround forming stars, and to calculate the size of the planets growing within.

The results help paint a picture of a planet's earliest years, and tell us how our own small planet probably began its life, says Quillen.

Scientists have inferred the presence of nearly 250 planets in the last decade, but Quillen's method focuses on a unique aspect: the proto-planetary disk's thickness.

Quillen explains that a disk of gritty dust usually surrounds forming stars, and provides the raw material for planet building. The cloud of dust thins as the system ages, but if enough dust has clumped together, the "embryonic planet," as Quillen calls it, will knock the dust and grit into ever-more eccentric orbits. Over time, this will cause an otherwise razor-thin disk to appear puffed up.

"We're able to determine for the first time how large the bodies must be in a disk to scatter the dust the way we've observed," says Quillen, one of the world's leading experts on the interaction between planets and stellar dust disks.