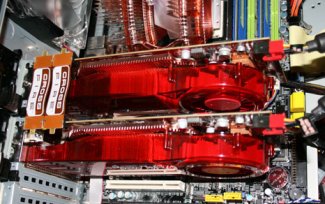 AMD showed off a test system at the World Cyber Games 2007 in Seattle that featured three of its upcoming products: the RD790 chipset, the Phenom processor and the RV670 graphics card.

The Inquirer has some more coverage:

Now we come to the star of the show. We cannot believe that company had the balls to show off an unreleased product on WCG finals, but it seems that AMD is changing its ways. This was not the only thing they showed, but for that we'll do another article or two.

The RV670 shown here did not come marked "RV670XT" or "RV670XTX", just one of RV670 reference designs. The two boards worked in Crossfire, hidden in huge Thermaltake chassis. These boards had a dual-slot cooler, and power consumption is such that it can run just from the PCIe 2.0 slot alone. However, in order to keep the compatibility with PCIe 1.1 motherboards on the market, six-pin PEG connector was used.

We learned that no final clocks are set yet, but the boards that are here in Seattle worked at quite interesting clocks. Needless to say, this product is going to offer high-end performance for excellent price. We will have quite an interesting battle on our hands.

But to get back to the boards themselves, the design is something we would put between Radeon X1950 and 2600XT. 512MB of GDDR4 memory were used on the card, but the cards had no DisplayPort connectors. We had no means to measure the temperature, but you can keep the finger touching the back of the PCB in GPU area with no problem, even when 3D apps are running.