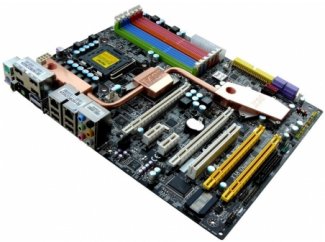 Besides, it looks as if there’s something missing on the watercooling end as well, since you can see two big holes, one in each end. This is suggesting to us that the traditional heatpipe is empty in this case and that the water from your watercooling kit will be running through the copper pipe instead. This seems like a very strange setup and it’s the first time we’ve encountered something like this.

The size of the cooler on the ICH9R is also strange, since this runs relatively cool in comparison to the X38 chipset which seems to have been fitted with a rather tiny cooler. This is a reason for concern in case the water pump would fail on your watercooling setup, as the heatsink doesn’t seem to be able to cope with the heat generated by the X38 chipset.

The motherboard should be available before the end of the month.