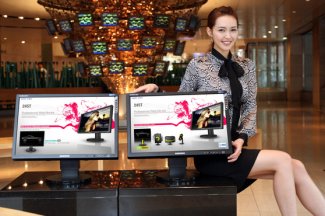 A couple of days ago Samsung unveiled a new 24" LCD display in South Korea.

According to Samsung's site the display has a color gamut of 97 percent of NTSC, 1500:1 contrast ratio, 300cd/m² brightness, 6ms gray-to-gray response time and a 178_ viewing angle.

In South Korea it costs a little over 1 million won, which translates to about 787EUR. Pretty expensive.