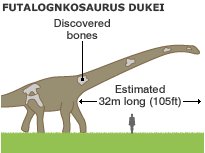 Palaeontologists have found the remains of a huge dinosaur in Argentina. The scientists say the Futalognkosaurus dukei would have measured at least 32m (105ft) in height - which makes it one of the largest dinosaurs ever found.

The skeleton showed signs that its owner had been eaten by predators.

The excavation site in Argentina has yielded a series of specimens since the first fossils were found there in 2000. The skeleton found in Patagonia appears to represent a previously unknown species because of the unique structure of its neck.

Its name (pronounced foo-ta-long-koh-sohr-us) derives from the Mapuche Indian words for "giant chief of the lizards" and for Duke Energy Argentina, a company which helped fund the its excavation.

"This is one of the biggest [dinosaurs] in the world and one of the most complete of these giants that exist," said Jorge Calvo, director of the palaeontology centre at the National University of Comahue, Argentina.

He is lead author of a study on the dinosaur published in the peer-reviewed Annals of the Brazilian Academy of Sciences.

The dinosaur's remains are thought to have washed into a river, creating a barrier that collected the remains of other now-fossilised animals, fish and even leaves found at the site.

Since the first bones were found on the banks of Lake Barreales in the Argentine province of Neuquen in 2000, palaeontologists have dug up the dinosaur's neck, back region, hips and the first vertebra of its tail.

Since the first bones were found on the banks of Lake Barreales in the Argentine province of Neuquen in 2000, palaeontologists have dug up the dinosaur's neck, back region, hips and the first vertebra of its tail.

"It's among the biggest dinosaur finds and the most complete for a giant dinosaur," Alexander Kellner, a researcher with the National Museum in Rio de Janeiro, told Reuters news agency.

"The accumulation of fish and leaf fossils, as well as other dinosaurs around the find, is just something fantastic. Leaves and dinosaurs together is a great rarity. It's like a whole lost world for us."