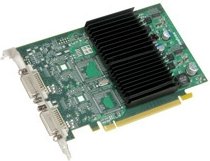 It's been a while since Matrox was trying to compete head-to-head in the 3D graphics market with other players like NVIDIA but apparently they are still making new niche graphics cards.

The firm today unveiled a series of Millenium P690 graphics cards which have a power consumption of under 12W. The cards all have passive cooling which makes them a good choice for silent systems, they feature DualHead support and there's also an upgrade to support up to four analog displays.

er of professional graphics solutions, today announced the availability of its Millennium P690 Series fanless graphics cards. These cards are available in several form factors, offer low power consumption, and unified display drivers for easy deployment across multiple systems. In addition, the P690 Plus LP PCI/PCIe products can be upgraded (via a Quad-HD15 cable) to drive four analog monitors—and up to eight analog or four digital monitors in a joined-graphics card configuration.

"The P690 Series is a redesign of the popular P650 Series graphics cards, combining new 90nm chip design and DDR2 memory technology with our rock-solid unified drivers," states Alan Vandenbussche, Vice President Sales and Marketing, Matrox Graphics. "As a result, the P690 Series is an ideal choice for professionals looking for low power consumption and a long production life, without the risk of unproven drivers."