Scientists use viruses to build nanomaterials 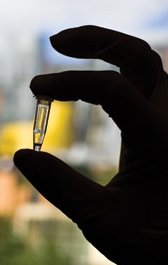 Scientists are working on a way to assemble nanomaterials with the help of viruses:

Angela Belcher leans in to watch as a machine presses down slowly on the plunger of a syringe, injecting a billion harmless viruses into a clear liquid. Instead of diffusing into the solution as they escape the needle, the viruses cling together, forming a wispy white fiber that's several centimeters long and about as strong as a strand of nylon. A gradu­ate student, Chung-Yi Chiang, fishes it out with a pair of tweezers. Then he holds it up to an ultra­violet light, and the fiber begins to glow bright red.

In producing this novel fiber, the researchers have demonstrated a completely new way of making nanomaterials, one that uses viruses as microscopic building blocks. Belcher, a professor of materials science and biological engineering at MIT, says the approach has two main advantages. First, in high concentrations the viruses tend to organize themselves, lining up side by side to form an orderly pattern. Second, the viruses can be genetically engineered to bind to and organize inorganic materials such as those used in battery electrodes, transistors, and solar cells. The programmed viruses coat themselves with the materials and then, by aligning with other viruses, assemble into crystalline structures useful for making high-­performance devices.

But the approach is not just an alternative way to make familiar devices; it could also be the impetus for developing entirely new ones. In past work, Belcher has created virus-based thin films for rechargeable batteries. Now that she can spin viruses into fibers, she envisions threadlike batteries and other electronic devices that can be woven directly into clothing. "It's not really analogous to anything that's done now," she says. "It's about giving totally new kinds of functionalities to fibers."