Posted on Sunday, Oct 21 2007 @ 12:25 CEST by Thomas De Maesschalck
Samsung shows off two new LCD displays for notebooks that feature an aspect ratio of 16:9 - the same as HDTVs. The firm also announced an LCD display with active white LED backlighting that features improved picture clarity and lower power consumption. The active white-LED LCD has a contrast ratio of 10,000:1.

Mass production is scheduled to commence in the first half of next year for the 16:9 displays and in the second half of 2008 for the White-LED backlit panel.

The new 16-inch and 18.4 inch Samsung LCD panels have the same 16:9 aspect ratio as most LCD HDTVs, whereas notebook screens of the past have gradually moved from a 4:3 aspect ratio to the current standard of 16:10 that became popular with the widespread use of Windows XP, a phenomenal increase in Web traffic and the rise of multimedia content.

However, with the growing use of Windows Vista and wireless LANs, there has been a sharp rise in the use of notebook PCs, in large part, as an entertainment medium. The most accurate representation of video content for Blu-ray DVDs, HD-DVDs, electronic games and digital TV can be seen in the use of a 16:9 notebook display.

When the source video is 16:9, a 16-inch HD LCD will reproduce movie images at 114 percent better screen efficiency than that of those provided by a 15.4-inch display with a 16:10 aspect ratio. Similarly, an 18.4-inch full-HD LCD allows users to watch a movie with an image that is 124 percent better screen efficiency than that of a typical 17-inch model and about the same efficiency as a 19-inch model.

In addition to its 16:9 aspect ratio notebook displays, Samsung has completed development of a 15.4-inch LCD with an active, White-LED backlight. The new 15.4-inch display operates on 40 percent less power than a typical LED backlight. 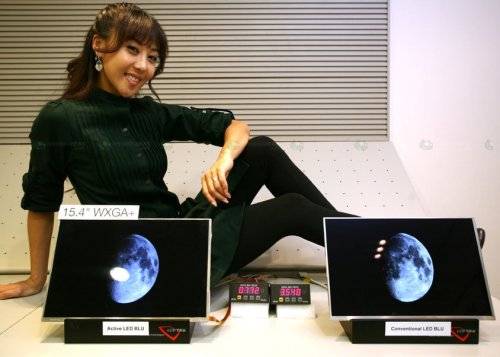