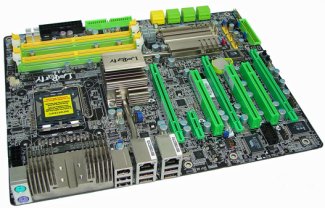 The guys from AnandTech took a look at a new overclocking motherboard from DFI - the DFI UT P35-T2R.

Beyond color enhancing UV lights to show off the board, the enthusiast knows that beauty in electronics, as with all other things, can often lie only skin deep. Rigorous in-house testing by DFI to iron out BIOS kinks was chosen over sending out boards at the chipset launch. This was done in an attempt to nail issues before users spent their hard earned dollars for partial functionality. As a matter of fact, anyone who buys motherboards close to official chipset launch dates should be fully versed in the ritual BIOS flashing regimen often required for long-term usefulness. Running a few quick benchmarks featuring high front side bus speeds might grab some early headlines, but it does not indicate a board's actual performance capability or stability. Put in perspective for the end-user, the two month delay is not such a bad thing, if a more solid and compatible motherboard is the end result.

Check out the full review over here. After rigorous testing the reviewers conclude this motherboard is a perfect match for computer enthusiasts. It offers good performance, a nice layout, a good BIOS and lots of overclocking potential. Unfortunately there's also a drawback, the motherboard is quite expensive and will cost you about $300.