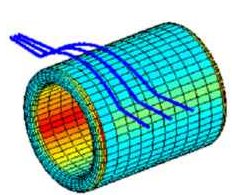 Allan Greenleaf, a professor of mathematics at the University of Rochester, has solved a mathematical problem which may lead to the development of 3D TVs.

These electromagnetic wormholes (EMW) would create a full invisibility cloak in a tube which surrounds whatever they were employed to hide. Such devices could eventually be employed to make true 3D TV possible, and without special glasses.

It sounds like something out of science fiction, and the researchers themselves admit this is a long way off from practical application. However, scientists are now theorizing about such things and believe that they are ultimately possible. To understand what the true 3D TV would look like and how it would operate, let's first look at the properties of the EMW.

In their simplest forms, EMWs are basically tubes. They create a specific type of EM field around an object, one which refracts electromagnetic waves of all frequencies, according to the researchers. The EM radiation continues on from its source as it would've without the tube being there. Sounds great, but what's the practical application?