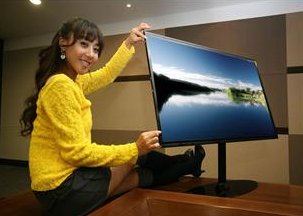 Samsung unveiled a new 40" LCD display at FPD International 2007 in Japan that has a thickness of only 10mm. This new display, expected to usher in the next wave of large-screen TVs, has the same profile as 10-20 inch LCDs designed for desktop monitors. Its bezel has been reduced from a conventional 30mm to 14.6mm. The panel, using an LED backlight, reproduces 92 percent of the NTSC standard for color saturation and features low power consumption of 90 watts or less.

For notebook PCs, Samsung will unveil premium LCD panels with a 16:9 aspect ratio. Available in 16-inch (40.6cm) and 18.4-inch (46.7cm) screen sizes, these new panels allow notebook users to optimally view high definition movies, digital TV and next-generation gaming, all of which were designed for a 16:9 aspect ratio. In addition, Samsung will show its new 15.4” (39.1cm) LCD with an active, white-LED backlight.

At FPD International, Samsung also will exhibit its new 22-inch desktop monitor LCD with a next-generation DisplayPort interface approved by the Video Electronics Standards Association that enhances the use of high-quality graphics (8 bits or higher).

In the digital information display (DID) area, Samsung will spotlight a 46-inch model with a brightness level of 1,500nits, triple that delivered by LCD panels designed for TV viewing. The higher brightness level makes Samsung DIDs easier to see in public places, where sunlight and fog interfere with visibility. The featured 46-inch model has a bezel no more than 10 millimeters thick, to facilitate the formation of video walls comprised of multiple panels side by side.

In the mobile display section of its FPD exhibit, Samsung is featuring a seven-inch display with an embedded touch screen on its upper glass layer. It also will show a 2.1-inch LCD with sensor-based automatic brightness control that adjusts the brightness of the backlight to match ambient lighting, while lowering power consumption by around 25 percent.

In addition, Samsung will spotlight next-generation concepts such as a 14.3-inch plastic display, 8.1-inch e-paper, and a 14.1-inch active-matrix OLED.