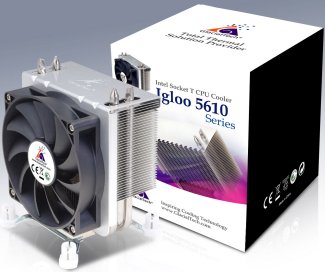 GlacialTech unveiled two new coolers this week, the Igloo 5610 PWM and Igloo 5610 Silent. Both heatsinks feature a copper base and aluminum heatpipes and fins.

The Silent version’s fan quietly and efficiently brings the temperature down. The low decibel (19dB), high volume (30.8 CFM) fan is 80mmx80mmx25mm and runs at an ultra-quiet speed of 1800 RPM.

Unlike the Silent version of this series, the PWM version has an 80mm×80mm×25mm adjustable speed fan which brings the temperature down according to your needs, The fan ranges in speed from 800~3200RPM, with a maximum volume throughput of 51.3CFM. The Fan puts out 34dB maximum at full revolutions. The entire heatsink (both versions) keeps a relatively low profile and only weighs in at 373grams (Well within Intel’s safe CPU specification of 550 grams for a CPU cooler).

I'm not sure about the pricing but it shouldn't be too expensive.