Here's something odd: a slide from NVIDIA that compares the performance of the GeForce 8800 GT with the upcoming RV670 GPU from AMD. This piece of information was spotted on Expreview by VR Zone.

The site claims there will be two RV670 variants: the Radeon HD 3850 and Radeon HD 3870. Here's a look at the specifications and prices: Here's the slide with benchmarks results of the 8800 GT and a "RV670 XTX GDDR4". I'm not sure how trustworthy these results are as they come from NVIDIA and the graph is very biased. The graph aims to give you the perception that the GeForce 8800 GT is 2-4x better but in reality the difference could be just a couple of frames per second. So before you write off the RV670 it's probably best to wait a few more weeks for more credible benchmark results. 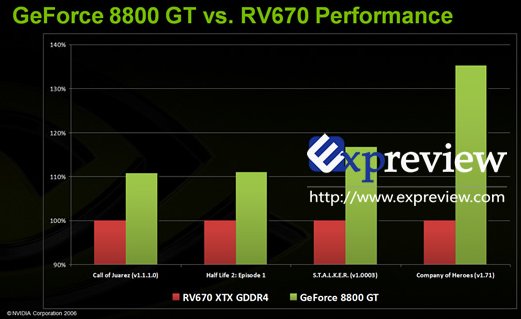