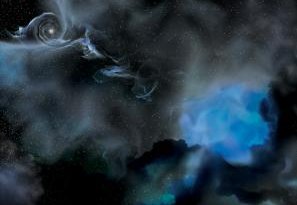 Astronomers announced the discovery of a black hole with a mass 24 to 33 times that of our Sun that orbits a star.

"We weren’t expecting to find a stellar-mass black hole this massive," says Andrea Prestwich of the Harvard-Smithsonian Center for Astrophysics in Cambridge, Mass., lead author of the discovery paper in the November 1 Astrophysical Journal Letters. "It seems likely that black holes that form from dying stars can be much larger than we had realized."

The black hole is located in the nearby dwarf galaxy IC 10, 1.8 million light-years from Earth in the constellation Cassiopeia. Prestwich’s team could measure the black hole’s mass because it has an orbiting companion: a hot, highly evolved star. The star is ejecting gas in the form of a wind. Some of this material spirals toward the black hole, heats up, and gives off powerful X-rays before crossing the point of no return.