As you can see on the screenshot. ATI used some HD-DVD and Blu-ray titles. including The interpreter, Deja VU, Casino Royale and King Kong, and played the most bit rate intensive chapters of these movies. In the ones that use H.264, ATI’s upcoming RV670 is slightly better or similar to two Nvidia cards; but it is odd that the 8800 GT performs worse than the 8600 GT in Casino Royale Chapter 9. 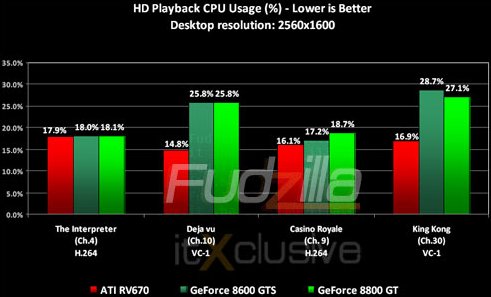 Though, we're more interested in the gaming performance than how well the card does in HD video playback.