The Organization for Economic Co-operation and Development — a 30-member club of nations — compiles the most often cited international comparison. It puts the U.S. at 15th place for broadband lines per person in 2006, down from No. 4 in 2001.

The OECD numbers have been vigorously attacked by anti-regulation think tanks for making the U.S. look exceedingly bad. They point out that the OECD is not very open about how it compiles the data. It doesn't count people who have access to the Internet at work, or students who have access in their dorms.

"We would never base other kinds of policy on that kind of data," said Scott Wallsten, director of communications policy studies at the Progress and Freedom Foundation, a think tank that favors deregulation over government intervention.

But the OECD numbers are in line with other international measures. Figures from the British research firm Point-Topic Ltd. put the U.S., with 55 percent of its households connected, in 17th place for adoption rates at the end of June (excluding some very small countries and territories like Macau and Hong Kong).

"We're now in the middle of the pack of developed countries," said Dave Burstein, telecom gadfly and the editor of the DSL Prime newsletter, during a sometimes tense debate at the Columbia Business School's Institute for Tele-Information.

Burstein says the U.S. is lagging because of low levels of investment by the big telecom companies and regulatory failure. 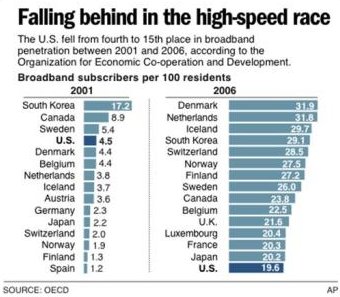 Note: I would like to add that this chart doesn't really give a fair comparison. Many people here in Belgium have broadband Internet access but the value of the service is usually quite low. The majority of the broadband users in my country have lines with download speeds of 4Mbps up to 20Mbps but the average Internet subscription comes with a tiny 12-15GB data transfer limit per month.