Posted on Monday, Nov 05 2007 @ 16:42 CET by Thomas De Maesschalck
A couple of months ago I reviewed some silent fans from Noctua and today the firm informed me they've released a new NF-P12 fan with "psychoacoustic optimizations" to make the fan less annoying to the human air.

"One of the main difficulties in the design and development of axial fans is to achieve a good balance of the three key parameters of airflow, pressure and noise", explains Mag. Manfred Stadler from the Austrian Institute for Heat-Transmission and Fan Technology (Österreichisches Institut für Wärmeübertragung und Ventilatorentechnik, ÖIWV). "Even in the field of PC cooling, each application has different requirements though: Whereas CPU coolers require high static pressure, it's mostly the airflow to noise ratio that counts when it comes to case fans. Common fans are usually designed to be all-round solutions compromising in certain areas in order to achieve solid results in all typical applications. Noctua, on the other hand, is following a two-fold approach with its NF-S12 and NF-P12 fan series in order to achieve optimal results at various applications: While the NF-S12 was optimized so as to provide a class-leading airflow to noise ratio in the lower speed ranges and therefore makes for an excellent case fan, the NF-P12 was designed to produce high airflow and an outstanding amount of static pressure, which makes it perfect for use on CPU coolers and other high-impedance applications."

The fan uses a SSO-bearing and has a nine blade design with Vortex-control notches (VNC). At its max speed of 1300RPM the fan has an airflow of 54.3CFM while producing only 19.8dBA. The fan ships with two adaptors, with the U.L.N.A. the airflow drops about a third but the noise level drops to only 12.6dBA. The fan also has a long MTBF of 150,000 hours and a 6-year warranty but it's not really cheap. 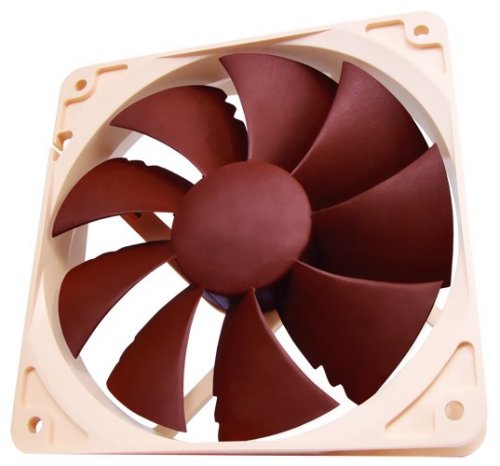