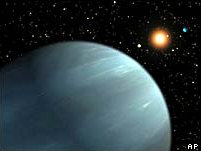 Astronomers have found a new planet in the 55 Cancri solar system, bringing the total number of known planets orbiting this star to five. This is the most found to date in a single solar system outside our own.

The newly found planet is a gas planet about 45 times the mass of our own planet. The scientists believe there might even be more planets in the 55 Cancri solar system but our current technology isn't advanced enough to detect small rocky planets like Earth or Mars:

If the new planet, which has mild surface temperatures, has a rocky moon or moons around it, say the astronomers, then theoretically they could support liquid water.

But it is the bigger picture that is really intriguing these planet hunters.

They say this quintuple planet system has many similarities to our own.

The planets orbit a star which is similar in age and mass to our own Sun and the system also boasts its own gas giant - a planet four times the mass of our own Jupiter in a similar orbit to Jupiter.

What they have not yet found is a rocky planet like the Earth or Venus, but according to Professor Geoff Marcy, of the University of California, Berkeley, who led the work, that may only be a question of time and technology.

"There is an intriguing, mysterious gap between the fourth planet out around 55 Cancri and the Jupiter-like planet that's far away," he says.

"In that gap, we don't know what there is. Our current technology would be able to detect big planets like Neptune, Saturn and Jupiter. We don't see any of them.

"So if there are any planets there, they must be smaller, the size of the Earth.

"In fact, it's a little hard to imagine that there's just nothing there in this big gap. So the suggestion is there might be small rocky planets, like Venus, Mars or Earth."