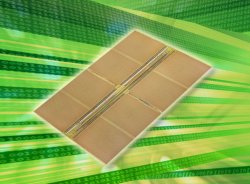 Elpida announced it has created the first 65nm 1Gb DDR2 SDRAM memory chips. The chips will start sampling in December and mass production is slated for the first quarter of 2008.

"The new 65nm process and our own storehouse of design technology have made it possible for the 1-Gigabit DDR2 SDRAM to become the world's smallest chip," said Hideki Gomi, Officer of Process Technology. "Given the imminent transition from 512-Megabit to 1-Gigabit products, Elpida is now geared up to produce high-performance 1-Gigabit DRAMs at lower cost," he added.

A smooth migration to the new 65nm process is expected, as most of the manufacturing equipment now used in the 70nm process will also be used in 65nm production. In addition, the manufacturing transition will be made easier by the process development undertaken on the mass production line at Hiroshima Elpida.