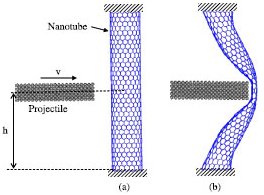 Researchers are working on a carbon nanotubes-based replacement for Kevlar:

The trait that makes carbon nanotubes so interesting for use in bulletproof vests is that the carbon nanotubes have excellent resistance to repeated ballistic impacts. In theory, that would mean that soldiers and police officers wouldn’t need to replace body armor after taking hits and multiple hits in prolonged firefights would be more survivable than with current generation body armor.

Unlike Kevlar fibers that deform and loose effectiveness after struck, the carbon nanotube vest can withstand repeated impacts to the same spot without allowing the bullet to penetrate. The researchers say that body armor 600nm in thickness constructed form six sheets of the 100nm thick carbon nanotube yarns could bounce off a bullet with muzzle energy of 320 J.