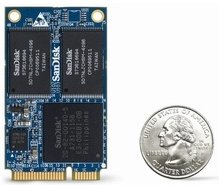 SanDisk has unveiled a new product that may increase the performance of your computer. The SanDisk Vaulter Disk drops into a PCI Express slot and has up to 16GB of fast flash-based buffer memory for frequently accessed files.

With SanDisk’s Vaulter Disk, which is a flash-based PCI Express module, both laptop and desktop computer manufacturers are able to harness the speed of embedded flash memory for frequently accessed files while continuing to use a spinning hard drive for bulk storage of less frequently accessed data. The Vaulter Disk requires only enough memory to host the computer’s operating system and selected optional user data that is benefited by the faster access time using flash memory. The hard drive stores files, user-generated content and applications that do not require or benefit from faster seek times. The two drives operate in parallel, thereby increasing the overall speed and performance of the PC.

SanDisk Vaulter Disk accelerates performance by pre-controlling the distribution of storage data between itself and a high-capacity hard drive. This parallel activity increases overall user responsiveness over a hard drive-only configuration.

“SanDisk Vaulter Disk consistently boosts user responsiveness by taking advantage of the best native characteristics of a flash-based module and a hard drive,” said Tavi Salomon, Vaulter product manager at SanDisk “It is the parallel operation of both Vaulter and the hard disk that provides an affordable solution for consumer PC users who will benefit from flash memory performance.”

The SanDisk Vaulter Disk will be available to OEMs in early 2008 in 8GB and 16GB capacities. Pricing and performance details are unavailable.