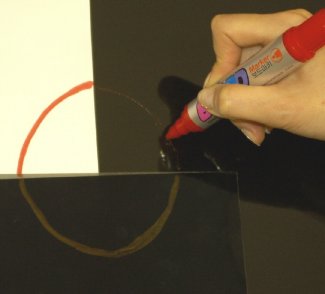 Last week LG.Philips showed off the first dirt-resistant LCD display for notebooks. The firm says this new display allows you to easily remove dust, smudges, fingerprints and even permanent ink.

TFT-LCD panels usually feature a coating on the surface of the polarizer film, designed to reduce glare and reflections. Because of their chemical properties, some of these coatings have a tendency to hold onto dirt and oil. A computer user’s fingers are a ready source of both, and people touch the hinged screens on notebook computers quite often in order to adjust them.

Generally, to make LCD panels dirt-resistant, manufacturers must add a second coating to the polarizer film in addition to the glare-reduction coating. This is a time consuming process that slows delivery time and adds to the cost of panels. LG.Philips LCD has found a way to eliminate this additional step while also delivering superior dirt resistance.

“Our new panel employs a principle similar to that used on non-stick frying pans. Dirt and oil can easily be wiped away,” said Byung-Chul Ahn, who heads up development of advanced technology for LG.Philips LCD.

“Like millions of other people, we use notebook computers when traveling on business. Fingerprints have always been an especially big annoyance, and if they are not cleaned off immediately they become even harder remove from the screen. That is why we developed this new technology. At LG.Philips LCD we will continue to develop products that not only meet our customers’ needs but exceed their expectations,” Ahn added.

The new technology will initially be used on LG.Philips LCD’s 15.4-inch widescreen panels for notebook computers and mass production of the product will begin in the first half of 2008. The company plans to expand availability of the new technology to notebook panels of all sizes by the end of next year.