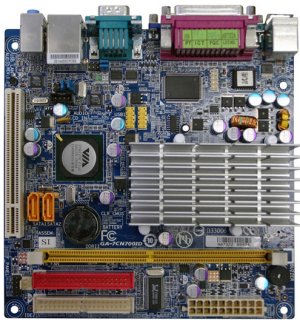 Motherboard maker Gigabyte is working on three mini ITX boards, FUD Zilla reports. These motherboards will use integrated VIA C7 1GHz and 1.5GHz processors and will be really small:

All three models features the CN700 chipset and the VT8237R Plus southbridge. They all rely on a single DDR2 DIMM slot for memory and are limited to 533MHz memory. Each board also only have a single PCI slot, a pair of IDE and SATA connectors and onboard 10/100Mbit Ethernet. The Ethernet controller is slightly different here between the boards.

All three models also support 5.1-channel sound, but only AC97 rather than HD audio. The rear I/O consists of four USB 2.0 ports with a further four from onboard headers, a D-sub, serial and parallel port, an Ethernet port and three audio jacks.