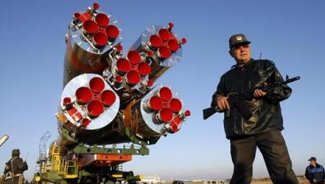 The Russian government is going to build a new cosmodrome in 2015:

The launch center, in Russia's Far East region of Amur, will be called Vostochny, Ivanov was quoted as saying by the newspaper. It would be Russia's first launch center for manned missions on its own territory.

Russia currently has several space launch centers on its own territory, including one at Plesetsk in northern Russia, but none are used for manned missions.

Russia plans its first manned space mission from its own territory by 2018.

Russia's Space Agency said earlier this month that they had received an official decision to build a launch center, but no definitive site had been chosen.

The Russian government currently rents the Baikonur Cosmodrome in eastern Kazakhstan, but has faced difficulties with its lease agreement after an unmanned Proton rocket crashed on Sept 6 near a city where the Kazakh president was visiting.