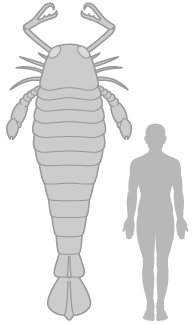 A team of European researchers found a fossilised claw of a scorpion-like creature that crawled the Earth 390 million years ago. Based on the size of the claw, scientists believe this beast would have been 2.5 meters (8 feet) long.

The creature, which has been named Jaekelopterus rhenaniae, would have paddled in a river or swamp.

The size of the beast suggests that spiders, insects, crabs and similar creatures were much larger in the past than previously thought, the team says.

The claw itself measures 46cm - indicating its owner would have been longer even than the average-sized human.

Overall, the estimated size of the animal exceeds the record for any other sea scorpion (eurypterid) find by nearly 50cm.

The eurypterids are believed to be the extinct aquatic ancestors of modern land scorpions and possibly all arachnids (the class of animals that also includes spiders).

"The biggest scorpion today is nearly 30cm so that shows you how big this creature was," said Dr Simon Braddy from the University of Bristol, UK.