Rambus working on memory with terabyte of bandwith 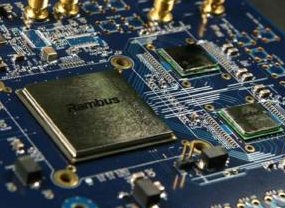 Rather than simply increasing the clock speed of memory to achieve higher output, Rambus looks to boost bandwidth with a 32X data rate. Just as DDR memory technologies doubles transfer on a single, full clock signal cycle, Rambus’ proposed technology is able to data at 32 times the reference clock frequency. With 32X technology, the memory company is targeting a bandwidth of 16Gbps per DQ link with memory running at 500MHz. In contrast, today’s DDR3 at 500MHz achieves a bandwidth of 1Gbps.

Of course, it requires a little explanation on how a technology that enables a DQ link 16Gbps of bandwidth could result in a Terabyte of throughput. Rambus’ aim for the technology is to grant Terabyte bandwidth to a system on a chip (SoC) architecture, and such may be achieved with 16 DRAMs operating at 16Gbps, 4-bytes wide per device.

Another innovation that Rambus plans to integrate into its Terabyte memory initiative is FlexLink C/A (command/address), which the company claims is the industry’s first full-speed, scalable, point-to-point C/A link – with the C/A running at full speed along with the DQ. FlexLink C/A also simplifies the interface between the memory controller and DRAM. For example, traditional legacy interfaces may require a 12 wire interface, FlexLink C/A can operate point-to-point with just two wires.

Furthermore, FlexLink C/A is named for its flexibility given to system designers, as now the overhead wires freed from the FlexLink C/A interfaces may be devoted to more data wires. Conversely, the model may offer greater bandwidth with the addition of more FlexLink C/A wires, making the technology more easily scalable.

DailyTech says the terabyte bandwidth memory should arrive on the market in 2011.