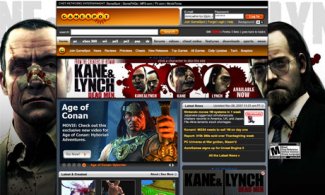 One of the steamiest scandals of the week is that game review website GameSpot allegedly fired longtime game reviewer Jeff Gerstmann because his review of Eidos' Kane and Lunch: Dead Men wasn't positive enough.

A visit to Gamespot shows that the Xbox 360 and PlayStation 3 game has taken over the site very prominently, with backgrounds and multiple banner ads all pitching Kane & Lynch. Allegedly, publisher Eidos "took issue with the review and threatened to pull its ad campaign."

Jeff's review was certainly less than glowing. He assigned the game a 6.0, otherwise known as "Fair" on the Gamespot scale. The game is currently enjoying a Metacritic score in the 65 to 69 range, which the site describes as "mixed or average reviews." According to our tipster, it wasn't necessarily the score that was reason for Gerstmann's rumored axing, but the "tone" of the review.

Gerstmann has been no stranger to controversial reviews, as his scores of 10 for Tony Hawk's Pro Skater and 8.8 for The Legend of Zelda: Twilight Princess had sensitive internet users up in arms. It's now possible that many bitter fanboys may have had their wishes for his firing granted.

As our tipster points out, if the rumor is true, it could point to a distressing precedent at Gamespot and parent company CNet. "As writers of what is supposed to be objective content, this is our worst nightmare coming to life," wrote the tipster.