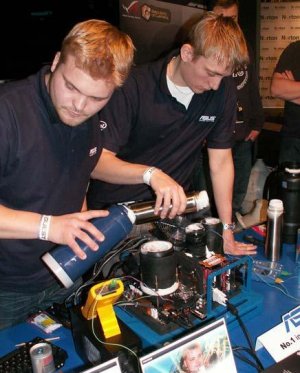 Swedish overclockers Kinc and crotale polished their overclocking skills at DreamHack 2007 this weekend. First they broke the 3DMark world record by scoring 29,147 points and a day later they smashed their previous record with a score of 29,325.

The polished world record is 29,325 points, an increase by 178 points from the day before. The key was to push the cores of the Radeon HD 2900 XT graphics cards from 1175 MHz to 1200 MHz. The graphics memory was also slightly higher clocked. They are still 120 MHz short of the processor of the record system used by Kingpin, Shamino and Hipro during the Plaisio Overclocking Event in Greece. If they would be able to get a hold of a similar processor, a dream score of 30,000 points is starting to look quite feasible.