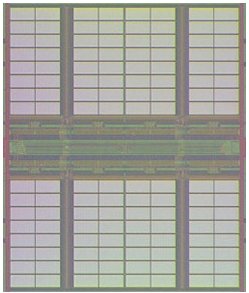 NEC Corporation today announced that it has succeeded in developing a new SRAM-compatible MRAM that can operate at 250MHz, the world's fastest MRAM operation speed. MRAM is expected to be the dominant next-generation memory technology as it realizes ultra fast operation speeds, nonvolatility - ability to retain data with the power off, and unlimited write endurance. Verification at the SRAM speed level proves that the newly-developed MRAM could be embedded in system LSIs as SRAM substitutes in the future.

The unique MRAM was designed and fabricated by NEC and has a memory capacity of 1 megabit. Incorporating a memory cell with two transistors, one magnetic tunnel junction, and a newly-developed circuit scheme, the new design achieves an operation speed of 250MHz; double that of conventional MRAMs and almost equivalent to that of recent LSI-embedded SRAM. Tests carried out using an internal signal-monitoring circuit demonstrated data output time of 3.7 nanoseconds from a 250MHz clock edge.

MRAM are expected to generate new value and applications for future electronic devices thanks to their nonvolatility, unlimited write endurance, high speed operation, and ability to cut memory power dissipation in half. For example, these features could enable instant start up of PCs and prevent drive recorders from losing data after a sudden break in power in the future. As substitutes for system LSI-embedded SRAM, MRAM can provide even more value as they are expected to enable extremely low power dissipation of system LSIs because they can sleep when they are not in use and wake up instantly.

NEC has been actively carrying out MRAM research since 2000, and has succeeded in the development of many groundbreaking technologies, such as MRAM cell technology suitable for embedding in next generation system LSIs, in recent years. These efforts have culminated in the successful demonstration of SRAM-compatible MRAM, which open the door to realization of extremely low power system LSIs. NEC will continue to design and fabricate MRAM toward realization of an MRAM-embedded system LSI to achieve high performance, next generation system LSIs.