Phytoplankton bloom off the coast of Namibia seen from space

Posted on Tuesday, Dec 04 2007 @ 07:30 CET by Thomas De Maesschalck
NASA released a stunning photo of a phytoplankton bloom that lit the Namibian waters blue and green a couple of weeks ago.

he Moderate Resolution Imaging Spectroradiometer (MODIS) on NASA’s Aqua satellite captured this photo-like image on November 8, 2007. The bloom stretches from north to south along hundreds of kilometers, though it is brightest in the center of this image. Such blooms are common in the coastal waters off southwest Africa where cold, nutrient-rich currents sweep north from Antarctica and interact with the coastal shelf. At the same time, the easterly trade winds push surface water away from the shore, allowing water from the ocean’s floor to rise to the surface, bringing with it iron and other material. The suffusion of nutrients from both the currents and upwelling water creates an environment where tiny surface-dwelling ocean plants (phytoplankton) thrive.

Phytoplankton blooms are so abundant off Namibia that their death and decomposition often robs the water of dissolved oxygen. As the plants die, they sink to the ocean floor where bacteria consume them. There is so much plant material that the bacteria use all of the oxygen available int he water before they finish breaking down the plants, creating a dead-zone in the water where fish can’t survive. Anaerobic bacteria, which don’t require oxygen, take over in the decomposition process, releasing sulfur dioxide as a byproduct. The sulfur dioxide interacts with the ocean water to create solid sulfur and hydrogen sulfide, a poisonous gas, which eventually erupts to the surface, sometimes killing fish. Though no eruption is readily apparent in this image, hydrogen sulfide eruptions are often visible in satellite imagery because the solid sulfur colors the water a milky yellow-green. 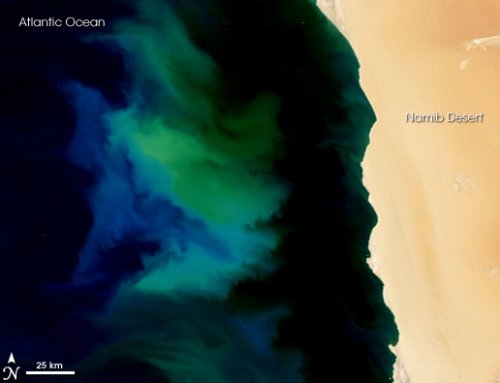