Google believes spammers are giving up

Google software engineer Brad Taylor claims isn't increasing anymore, in fact, it may even be declining for the first time in many years. The search giant refuses to disclose hard numbers but says the prevalence of spam as a percentage of all incoming Gmail traffic seems to be dropping:

Google won't disclose numbers, but the company says that spam attempts, as a percentage of e-mail that's transmitted through its Gmail system, have waned over the last year. That could indicate that some spammers have gotten discouraged and have stopped trying to get through Google’s spam filters.

Other experts disagree with Google, pointing out that overall spam attempts continue to rise. By most estimates, tens of billions of spam messages are sent daily. Yet for most users, the amount of spam arriving in their inboxes has remained relatively flat, thanks to improved filtering. 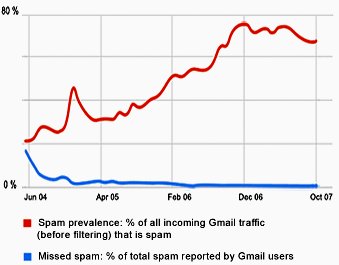 Less spam would be great but I think this news report is a bit too optimistic. I still see spam flooding my e-mail boxes by the dozens every hour.