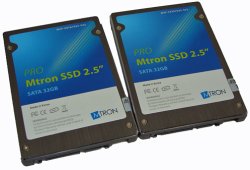 AnandTech has taken a closer look at another flash drive, this time they reviewed the MTRON MSP 7000 solid state disk and compared it to the WD Raptor.

One item of concern from our previous SSD reviews is the performance of the Intel ICH9 and ICH8 chipsets that cap sustained transfer rates at around 80 MB/sec. This performance limitation still holds true and Intel is working on a solution. This limitation greatly affects the synthetic programs like HD Tach and HD Tune, but in actual application benchmarks, we see less of a difference (1%~4%) in performance between the NVIDIA, AMD, and Intel chipsets. However, due to the current Intel bottleneck, we are using a test system that consists of an AMD Phenom 9600, Gigabyte GA-MA790FX-DQ6 with AMD 790FX/SB600 chipsets, 4GB of OCZ Reaper PC2-6400, and Windows Vista 64 Ultimate.

Now, let's take a quick look at this drive and see how it compares to the top performing desktop drive, the venerable Western Digital Raptor 150GB.

Check it out over here. The reviewer says this new SSD from MTRON has impressive performance. It has a 0.1ms access time, 108MB/s sustained transfer rates and totally beats the WD Raptor in all but two tests. The only problem with the MTRON drive is the price, at $1199 for 32GB it's still way too expensive for regular consumers.