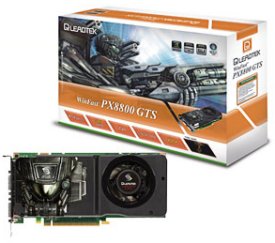 Based on 65nm technology and powered by NVIDIA GeForce 8800 GTS graphics processing units, WinFast PX8800 GTS 512MB features a superb 512MB 256bit GDDR3 memory clocked in 1940MHz. Just as with the 8800 GT series, WinFast PX8800 GTS 512MB is compatible with PCI Express 2.0 interface, the new bus architecture with double rate for a higher achievement. It is also ready for the most demanding bandwidth games and 3D applications in the future.

The card ships with Neverwinter Nights 2 and should be available in retail stores this week.