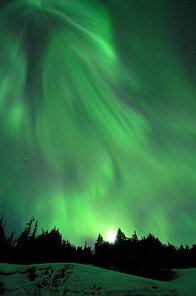 NASA spacecraft THEMIS made some new discoveries about Northern Lights.

The discoveries began in March less than a month after the five THEMIS satellites had been activated. "On March 23, 2007, a substorm erupted over Alaska and Canada producing vivid auroras for more than two hours." A network of ground cameras organized to support THEMIS photographed the display from below while the satellites measured particles and fields from above.

Right away the substorm surprised investigators: "The auroras surged westward twice as fast as anyone thought possible, crossing 15 degrees of longitude in less than one minute," says Angelopoulos. The storm had traversed an entire polar time zone in 60 seconds flat!

Also, "the display was surprisingly bursty." Photographs taken by ground cameras and NASA's Polar satellite (also supporting the THEMIS mission) revealed a series of staccato outbursts each lasting 10 minutes or so. "Some of the bursts died out while others reinforced each other and went on to become major events."

Scientists have been tracking and studying substorms for more than a century, yet these phenomena remained mostly unknown until THEMIS went into action.

Even more impressive was the substorm's power. Angelopoulos estimates the total energy of the two-hour event at five hundred thousand billion (5 x 1014) Joules. That's approximately equivalent to the energy of a magnitude 5.5 earthquake.

Where does all that energy come from? THEMIS may have found an answer:

"The satellites have found evidence for magnetic ropes connecting Earth's upper atmosphere directly to the Sun," says Dave Sibeck, project scientist for the mission at the Goddard Space Flight Center. "We believe that solar wind particles flow in along these ropes, providing energy for geomagnetic storms and auroras."

A "magnetic rope" is a twisted bundle of magnetic fields organized much like the twisted hemp of a mariner's rope. Spacecraft have detected hints of these ropes before, but a single spacecraft is insufficient to map their 3D structure. THEMIS's five satellites were able to perform the feat.

"THEMIS encountered its first magnetic rope on May 20, 2007," says Sibeck. "It was very large, about as wide as Earth, and located approximately 40,000 miles above Earth's surface in a region called the magnetopause." The magnetopause is where the solar wind and Earth's magnetic field meet and push against one another like sumo wrestlers locked in combat. There, the rope formed and unraveled in just a few minutes, providing a brief but significant conduit for solar wind energy. Other ropes quickly followed: "They seem to occur all the time," says Sibeck.

The technical term for these explosions is "hot flow anomalies" or HFAs. HFAs boost the temperature of solar wind particles ten-fold (as high as 10 million degrees) and they can stop the solar wind dead its tracks. "This is no mean achievement considering the fact that the solar wind moves at supersonic speeds near a million miles per hour."

"Hot flow anomalies may not play a major role in energizing auroral substorms--they happen too infrequently, less than once a day," notes Jonathan Eastwood of the University of California, Berkeley, who is studying them. "Nevertheless they are of interest. This is a fundamental physical process that accelerates particles to high energies and we are delighted to be able to study it."

Powerful substorms, giant magnetic ropes, explosions that stop the solar wind in its tracks: "We have much more to learn about all these things," says Angelopoulos. "I can't wait to see what comes next."