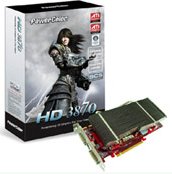 In order to satisfy every gamer, PowerColor provides a truly silent solution- HD3870 512MB SCS3 edition, with specially design cooling system, to meet everyone's expectation in the market. This extraordinarily designed model has a core clock speed of 775MHz, and effective memory speed running at 2252MHz, provided the same exciting gaming performance as the standard version.

This model features a silent heatpipe cooler, providing a totally silent environment for gamers; furthermore, to get better heat dispatching effect, heatpipe and fins are designed to attach on both sides of PCB. This outstanding design philosophy makes HD3870 512MB SCS3 become the best choice for gamers pursuing both speed and silent environment.