The first platform created specifically for a three-way SLI gaming experience, the XFX nForce 780i SLI motherboard offers unmatched performance and an unparalleled DirectX gaming experience. The only Intel solution that supports true PCI Express 2.0, this motherboard is superior for 3-way and SLI as well as multi-monitor configurations.

Featuring a first-of-its-kind Enthusiast System Architecture (ESA)-certified platform that enables users to take ultimate control of their gaming experience, the ESA offers real-time component monitoring and tuning features. Specifically, users can integrate multiple ESA components with the 780i motherboard into one platform. Users have greater control of their ESA system in real-time. The 780i motherboard also includes an easy-to-understand interface, which simplifies component debugging and maximizes overall system performance.

The motherboard features a pretty big cooling solution with several heatpipes and a big fan that cools the northbridge. 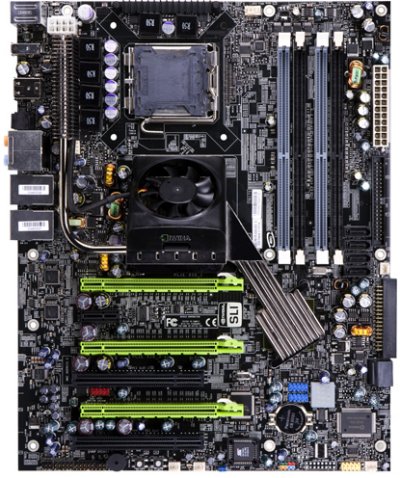 EVGA also released a nForce 780i SLI motherboard but it looks 100% identical to the one from XFX.