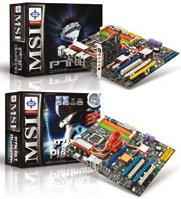 Highly Efficient Circu-Pipe and GreenPower Design
The MSI Circu-Pipe effectively reduces the high temperature from the chipset and MOSFET(field-effect transistor). This design improves the system stability and product life. The processor power supply of P7N series motherboards is based on four phases PWM IC and with MSI’s exclusive dual channel design; it can reach more than eight phase power quality and increase the efficiency of power conversion. Not only will the power supply become more stable, but also reduces the heat produced, especially during extreme overclocking.

POSCAP and solid capacitors
The MSI P7N series offer 100% “all made in Japan” high-quality solid capacitors. The PWM capacitors on the motherboards, recently developed by Sanyo, are an ultra small POSCAP design. The impedance values of general capacitors will differ due to the operating frequency change. Most commendable of POSCAP is that in all kinds of operating frequencies, this product can maintain low impedance characteristics. POSCAP is suitable for motherboards with high-frequency switching power supply.

Overclocking friendly features
The MSI P7N Series has overclocking-friendly features to meet the precise demands of overclockers. The motherboard is equipped with onboard LED POST that shows the boot status or warnings if necessary, the LED Detector will show if the add-on cards in the PCIe/PCI slots are connected properly. Reset the system in a second during overclocking with the onboard reset button and with the delivered M-connectors, connecting devices in the case will be easier than ever.