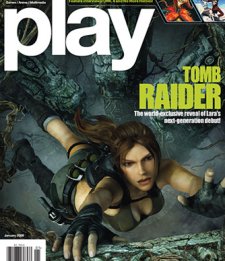 Polygon babe Lara Croft is coming back next year for another adventure. PLAY magazine has the exclusive on this upcoming game which is developed by Crystal Dynamics.

The action in Underworld will take place after the events of Tomb Raider Legend and according to the game developer Lara will be a lot more realistic:

Commenting on one of Lara's locations, PLAY says, "In the level where Lara explores Southern Mexico, she leaves footprints in the mud, but it's raining so they wash away. The bodies she leaves behind in combat encounters will stay, however, as will the debris from any destruction she causes."

On an immersive and epic environment and weather system, Eric Lindstrom says, "we developed a hybrid lighting model that combines dynamic lights with carefully created light maps to make our world look stunning in ways that none of the available methods could achieve alone."

Crystal Dynamics have also given Lara full motion capture "to bring a more natural fluidity to her movements, with proper weight and secondary motion." Moreover, when Lara kneels on a muddy outcrop, only her knee will be covered in dirt and this will gradually dissipate as she continues on her journey.